I still remember it was a cold April day in 2000 when Betty and I went to Sichuan Province in south western China for a vacation. On our way back to the city from the mountains, I saw some shadows looking like people moving very slowly up and down the hilly, unpaved country side road. It was getting dark and snowing at the time. When the tour bus got closer to those moving objects, I came to realize that they were young children walking without shoes and with little warm clothing. So I said to the tour guide, “What a group of unfortunate children, having to walk in this lousy weather!” After a brief moment of silence, the guide said, “Mr. Boey, these are the lucky ones! At least their family can afford to send them to school!” I almost cried.

Our children in Canada have been spoiled. They tend to take things for granted and are unaware that many underprivileged children on the other side of the world have no chance to even go to school. Many farming families can only afford to send one of their children to school. There is even a saying in Guangxi, that “Sending daughters to school is a waste of money; it is far more profitable to spend the money raising pigs.” To those lucky few who have the chance to walk to school, they literally have to walk “10,000 miles in order to read 10,000 books.”

So when I was asked to be a sponsor for a cause as meaningful as this—to help the poor students in China—not only had Betty and I agreed without hesitation, we also became volunteers the following year. This decision has brought great joy and a deep appreciation for the words of Jesus, that “it is more blessed to give than to receive.”

After an October 2005 visit to Guangxi with delegates from the Canadian west coast, I had an opportunity to visit Malipo in Yunnan province this past March with several US delegates. It was a long and arduous journey, combining short and long haul flights and a road trip of about 30 hours before we reached Malipo. Along the way, we drove through the tourist area of the “Forest of the Rocks”, but as this was not a sightseeing trip, I could not stop to enjoy such breathtaking scenery and had to postpone it for future visits.

It was already dark when we approached Malipo, which is only 7 km from the Chinese-Vietnam border. Because of its proximity to the border, our entry to the town was further delayed by the paper work required by the Beijing foreign department. The following morning, we were picked up by a fleet of 4-wheel drive vehicles to see the school. The two-hour trip scaling the mountains in the rain on muddy, unpaved roads with hair pin turns was nerve wrecking. Several of the SUVs got stuck a few times before we arrived at the so-called “school” up the mountains.

This is indeed one of the poorest regions of China which urgently need our help! One of the buildings we visited had been classified by the Chinese Government as category D (unsafe for occupancy). As a matter of fact, the adjacent building had already fallen down the previous month in a heavy thunder storm. The school that we visited was still in use despite the lack of “city water” and “washrooms” facilities, because this was the only building left standing. Students were not permitted to go up to the second floor as their weight might cause the structure to shake and speed up its disintegration.

We then gave each student some pocket money to show our immediate support. I could not help but notice that the headmaster was crying when we handed out RMB$100 (equivalent to about CAD$12.50) to each student. When I asked the headmaster how the money could be used by the students, he wiped off his tears and said, “Mr. Boey, this money would save these poor students one trip home in the next six weeks.” He explained that students normally have to trek the mountains on a 1-2 day journey during weekends to pick up the money from home to pay for the next installment of room and board. While most farmers make only RMB$500 a year, and the room and board cost over RMB$1,000 a year, parents have to work part time as laborers to earn extra money to keep their children in school.

This amount of money does not sound much to us, but it can help the underprivileged students secure a better future, and break the cycle of poverty! We have the power to help change the lives of these students who urgently need our help!

The CRRS Toronto Chapter believes that this power of love will continue to grow – to help many who need assistance and to bring hope and encouragement to everyone. 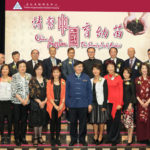